This is also posted on the FemEdTech Quilt site at: https://quilt.femedtech.net/2020/02/14/womens-work-femedtechquilt/

My textile contribution to the FemEdTech Quilt project was a while in the imagining and came together in reality over the last 5 weeks. I think I knew pretty early on that I would want to do something with pieced fabric and embroidery. Thinking about re-use got me thinking about feedsack quilts and I went as far as hauling some vintage fabrics out of the cupboard at home in December.

At Christmas I went to my friend Tessa’s annual Christmas party and once again admired her beautiful Victorian crazy quilt. At the same time I had the news that an old friend was quite seriously unwell. I had made her a pieced quilt some years ago out of silk off-cuts. I was allowed to keep the leftovers, and so it was them along with some ribbons and scraps of calico that I packed in my luggage to move to Canada in January. I brought some threads leftover from a piece of embroidery that I did for a banner in 2018 as well.

In thinking about feedsack quilts I was thinking about the nature of women’s work as well as ideas of unpaid labour. Feedsack quilts were borne of necessity – literally making quilts of out old cotton feedsacks. Feed producers clocked onto this and started selling feed and grains in brightly coloured cotton patterned bags and so many of these quilts are very bright, colourful and cheerful. For me they’re also a great symbol of the value of unpaid domestic labour; especially as it’s now possible to buy these “vintage” items at eye-watering prices. Domestic thrift chique.

My friend who gave me the silks that I used was a strong champion of women in technology when we worked together, and also a strong and active trade unionist. Whilst I was at Edinburgh I also learned to work with Wikimedia projects and helped to write more of the story of the Edinburgh Seven. They were the first women to matriculate in a UK University and they wanted to study medicine so that they could work as doctors because they recognised many women wouldn’t visit a male doctor. I embroidered their matriculation signatures a few years ago and found that very moving; tracing their actual handwriting, the signatures in the matriculation register that admitted them to study. I chose to embroider Emily Bovell’s signature into my block as I wrote her biography on Wikipedia. 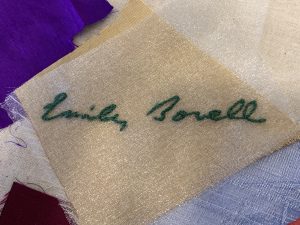 I know a little more about feedsack quilts than I do crazy quilts so I did a little reading. Whilst they tap into a tradition of re-use they belong to a different social class; many crazy quilts were made by women as a leisure pursuit and the fabrics used would typically be silks, ribbons, velvets. There could be up to 1500 hours of work in a good sized quilt.

“Crazy quilts became popular in the late 1800s, likely due to the English embroidery and Japanese art that was displayed at the Philadelphia Centennial Exposition. American audiences were drawn to the satin stitches used in English embroidery, which created a painterly surface, which is reflected in many Crazy Quilts. The displays shown at the Japanese pavilion of silk-screened work and Japanese pottery with a cracked-glaze inspired the American audiences. Similar aesthetics began to show up in Crazy Quilts, including unique patterns, and stitching that resembled spider webs and fans.” (Crazy Quilting, Wikipedia)

Since I moved to Canada with very little of my personal belongings, I was stitching this block entirely by hand, and I think in the end there is probably about 80 hours of work in it. I used a sew along one edge and flip over piecing technique to lay fabrics down over each other to build up the quilt. I even managed to include a little pocket. Because pockets are also a feminist issue. 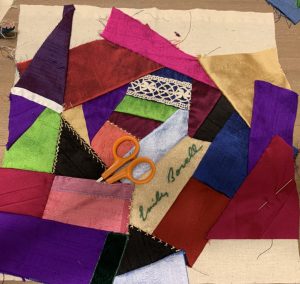 I used gold thread for an amount of the embellishment on the seams, drawing inspiration from Su Ming-Khoo and her #OER19keynote where she talked about kintsugi – the golden repair – the mending of ceramic breaks with gold dust and lacquer. Kintsugi is an “aesthetic of repair”, whereby the mended item becomes more precious through being broken and carefully repaired. Through my labour and work I hope that these little scraps of silk are being reassembled into something more precious and valuable.

I also noticed that I had placed purple and green silks next to each other, so I added a little white ribbon to create the suffragette colours and added the date 1918 to recognise that women in the UK were finally granted the vote in 1918, not sadly as a result of the suffrage campaign, but because over a million women worked in “men’s jobs” for less pay during World War 1. It took a world war to win the vote. 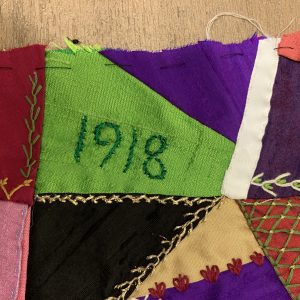 Another popular feature of crazy quilts is the spider web motif. Spiders were considered good luck. I think the web is a much more ambivalent symbol for us now. Big data and surveillance capitalism have rendered many of our activities online a form of unpaid labour. 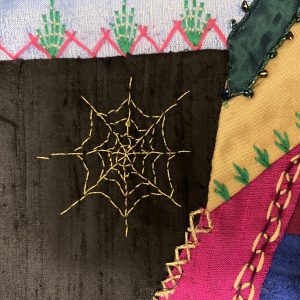 As I worked on my block I was exploring my new home city of Edmonton, and in an antiques centre I stumbled across a rather worn antique crazy quilt which has the most incredible embellishment work on it. It cost me about £45 but will no doubt cost me a lot more in time to repair and restore it. However, I enjoyed looking at some of the stitches and embellishments and copying a few into my block. 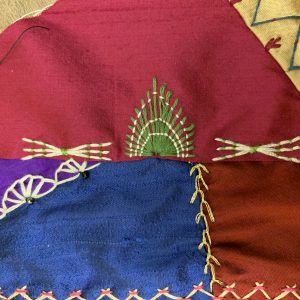 So this is it. My patch of work. My labour of love for the #FemEdTechQuilt

I also tried to keep a rough log of my progress and thoughts as I worked via Twitter and give thanks for all the lovely comments people left:

Now that I have a table and chair to work at, I’m starting to think about my #FemEdTechQuilt square. Originally I was going to use some vintage feedsack quilts, but instead I’m using some silk offcuts I was given by a friend. I think they came from her mother. pic.twitter.com/e7eDCh3YV2