Regular internet stalkers will have spotted that nearly 3 weeks ago I made a very big move across the Atlantic to start a new role as Deputy Provost with Athabasca University. I’ve based myself in Edmonton, on the basis that I at least know 1 person here, and am slowly finding my feet. I’ve never been a foreigner. I’ve never had anything less than an absolute right to remain in a country, so this is all a new and not a little sobering experience (and for friends back home affected by Brexit, I still don’t think I understand even a fraction of how stressful things must be). One of the things I am acutely aware of is that I’m not the first Scot to make the trip in this direction in order to seek their fortunes. So I need to think carefully about where I am. Indeed there are lots of little boxes in social media and other places where it demands that I update my “Location”.

When I write my address down, I’m in the city of Edmonton…

“By 1795, Fort Edmonton was established on the river’s north bank as a major trading post for the Hudson’s Bay Company. The new fort’s name was suggested by John Peter Pruden after Edmonton, London, the hometown of both the HBC deputy governor Sir James Winter Lake, and Pruden.” (Edmonton, Wikipedia)

…in the province of Alberta…

…in a country called Canada…

“While a variety of theories have been postulated for the etymological origins of Canada, the name is now accepted as coming from the St. Lawrence Iroquoian word kanata, meaning “village” or “settlement”. In 1535, Indigenous inhabitants of the present-day Quebec City region used the word to direct French explorer Jacques Cartier to the village of Stadacona. Cartier later used the word Canada to refer not only to that particular village but to the entire area subject to Donnacona (the chief at Stadacona); by 1545, European books and maps had begun referring to this small region along the Saint Lawrence River as Canada.” (Canada, Wikipedia)

I’m limited at present in the tools at my disposal for thinking about this. I’m culturally rooted somewhere else and that’s going to be my immediate go-to place; in time I will change that, but today I need to work with what I’ve got so bear with me….

Robert MacFarlane’s magical book Landmarks was spurred into creation by the news that many words used to describe the natural world had been dropped from the Oxford Children’s Dictionary in favour of other words deemed more relevant to modern life.* Although focussed on exploring the words used to describe the landscape of the British Isles, the intimate relationship he describes between language, sense of place, and sense of self I think transcends any one territory:

“Words act as compass; place-speech serves literally to enchant the land – to sing it back into being, and to sing one’s being back into it.”

In Alice Through the Looking Glass Alice encounters the “Wood Where Things Have no Names” and in that experience comes to understand that the power to name things is not simply about labelling, but also controls how things operate in the world in relation to other things. When the power to remember and use names is gone, the world is a disconcerting and disconnected place, in which the natural order of things is subverted.

Checking the https://native-land.ca/ site tells me that I’m on the land of: 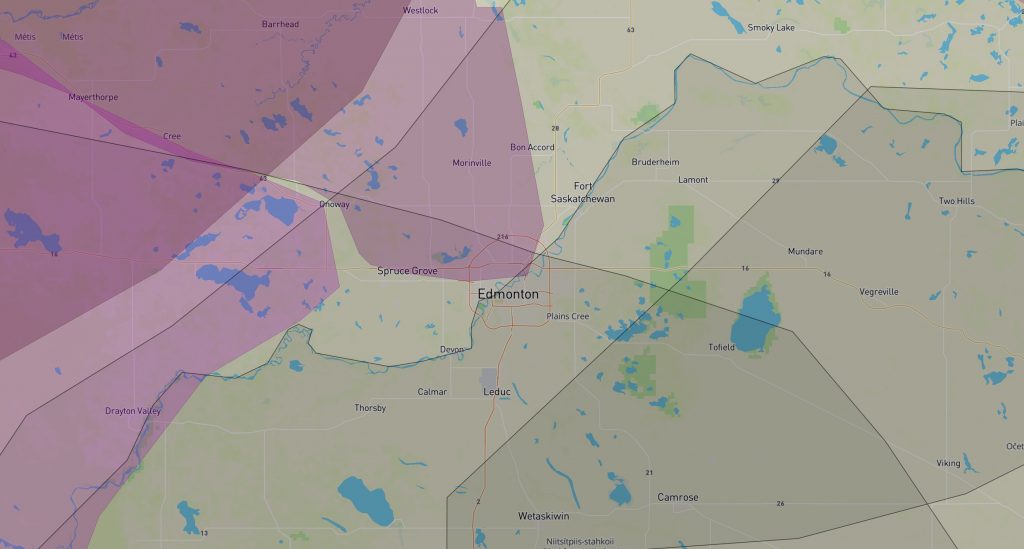 “Indigenous place names reveal information about the area’s geography, history and sometimes ecology. Names connect the land to the culture, while acknowledging the contributions of Indigenous people. Not recognizing those contributions — and even actively repressing them — has been a problem for decades.”

The City of Edmonton also has an open data portal and one of the data sets available is an Indigenous Places Names of Edmonton data set. This data set has been visualised as a map (oh, I am very fond of open data visualised as maps – it can be very powerful) which helps me locate some of these places since I am very new to the physical geography of this place.

The Native Land site also tells me that I’m on Treaty 6 territory (and I see people use this as their Location in Twitter regularly too).

“Treaty 6 is the sixth of seven numbered treaties that were signed by the Canadian Crown and various First Nations between 1871 and 1877. Specifically, Treaty 6 is an agreement between the Crown and the Plains and Woods Cree, Assiniboine, and other band governments at Fort Carlton and Fort Pitt. ”

I took my eldest niece to the National Library in Wellington a few years ago to see the Waitangi Treaty exhibition and so this is a story somewhat familiar to me in it’s broad brushstokes at least. Radically different ideas about land ownership and poor / difficult translation between parties seems to be a recurring trope of the colonial project. An email about research activities here at Athabasca University recently caught my eye, and led me to the work of Sheldon Krasowski, who published in 2019 his research on the history of the treaty negotiations.

“The most controversial aspect of the treaties is the surrender clause. The treaty text states that the Indigenous peoples “do hereby cede, release, surrender, and yield up” all of their lands to Her Majesty the Queen. However, my research has shown that a close analysis of eyewitness accounts reveals that the surrender of lands was never discussed during the treaty negotiations. ” (Opinion: To understand why the land remains Indigenous, look to history, Globe and Mail)

This all leaves me still pondering the difficult question of where I am and how to name it. There is no easy resolution here and so the best I can do is to hold all these different places in mind at once. Certainly none of this fits into the tyranny of a neat one line box for Location.