So Maren Deepwell blogged a lovely post expressing much of the joy and salve for the soul that I think myself, Tannis Morgan and her have all felt when we’ve done our thing on #ds106radio. I have a half-written post about much the same and I might even try finish it tonight. However, I’ve also  promised a few people that I would scribble down some notes about my broadcasting setup to add to the excellent set of posts that many others have already shared.

Bearing in mind that I taught myself all of this about 3.5 weeks ago now, this is not a definitive setup. I’ll try to keep sharing more as I tweak and refine and learn new tricks.

I started out by reading Jim’s blog post about his Soundflower / LadioCast set up (and obviously that took me to an older post by CogDog because everything good on the internet has been explored and written up by Alan in his immensley generous style). I duly downloaded both applications and configured them as per instructions. However, I could not for the life of me get LadioCast to connect to the server. I tried multiple times and after a quick conversation with Jim to check settings, came to the conclusion that there may be some incompatibility with the latest MacOS and Ladiocast. Part of coming to that conclusion involved downloading a trial copy of Audio Hijack and testing the same connection settings from there. It worked! And as I started to play a little with Audio Hijack I liked it a whole lot more.

My original thinking was that we’d stream a Spotify shared playlist and tweet along with it, but suddenly I could see how we could mix in other sources such as Skype really easily (note that you can probably also do this with Mixxx but it scares me a bit and I did not want to fuck up and embarass Maren and Tannis, who were already being super-kind about going along with my crazy ideas). So I ponied up the $59 required for a license and got to configuring it up. I reckon giving money to a small software house right now is probably helping someone somewhere pay the bills too. 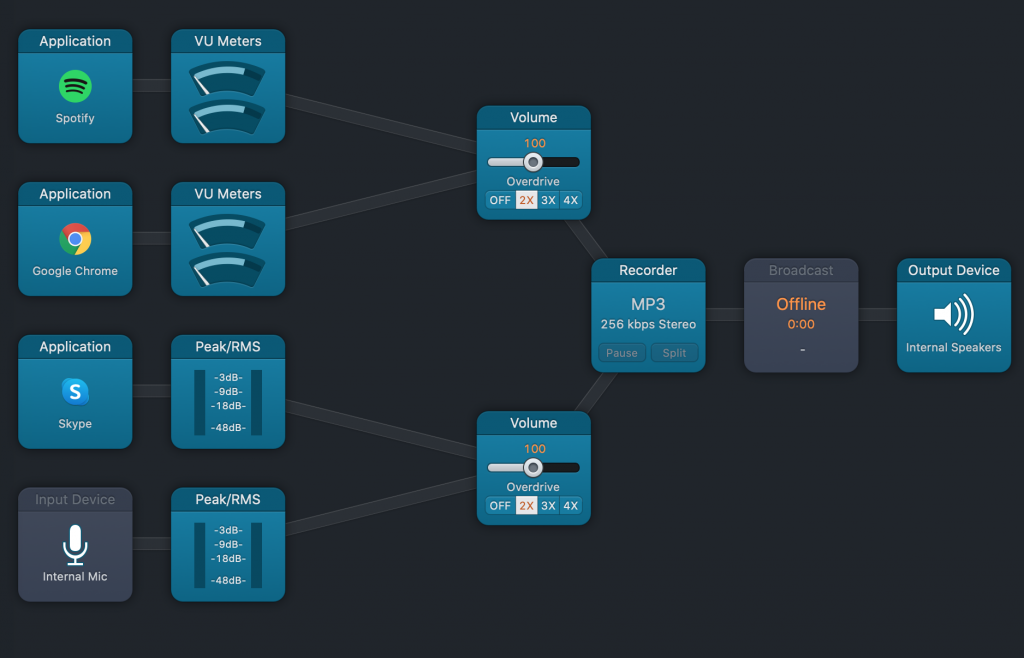 I’m aware that having the volume controls after the meters is weird, but I was planning to use them to fade the music and the voice over in and out. I played around with the A/B toggle switch in Audio Hijack but didn’t like it much. It switches between 2 signals which was a bit too blunt force for what I wanted. As it turns out when we’re on air I’m juggling far too much between Spotify, Twitter, Twitter DMs, Skype, and occassionally a web browser so trying to also use the volume controls to fade in and out has proven to be a step too far. Give me time though, and maybe an external mouse and a bigger screen…

With this set up I can hear everything, but Tannis and Maren can’t hear the music when it plays. So I record the show so that they can hear it later. I also cue them back in after every track. That’s how we’ve broadcast for the first 2 shows. The recording block has also been great for running various tests of configurations as I got to a working set up. The whole set up has also doubled as a really nice rig for recording other #ds106radio shows. I play via the browser and stream that into Audio Hijack and record it there. I can switch off the audio output so I can leave a laptop recording the radio whilst I jump onto another and do the paid work stuff.

I haven’t been using the mic input directly into Audio Hijack as my voice comes in through the mic input into Skype, but in theory this setup also works for solo broadcasting.

Now that I’m feeling a bit more confident about this setup and how to use Audio Hijack I’ve had a go at building another set up, this time using Loopback to feed the music audio back into Skype so that the others can hear it too. Again it was a post from Jim that gave me the nudge to go explore Loopback. I also got some excellent advice from Scottlo on using achieving the same effect with Soundflower. I will confess that I found Soundflower harder to get working as I wanted it to, so at the moment I’m going to try Loopback. I think. I haven’t yet bought a license for it, and I need to do that before tomorrow morning if I’m going to try use it in anger. 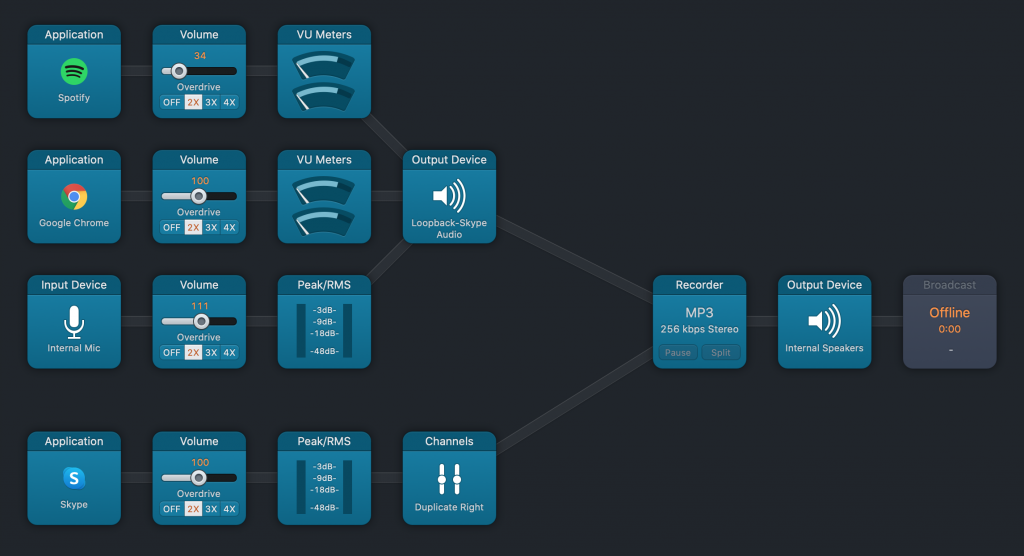 With this setup a composite signal of my mic plus any music playing is fed into a Loopback Pass-Thru. I’ve then got that virtual device set up as the mic input into Skype. So people on the Skype call can also hear anything I’m playing in real time. I did a little test of piping the signal into Skype and only recording the entire composite output from Skype, but oh boy, it sounded like total shit (shoutout to Scottlo here for flagging that one can use the Skype test call facility to check how it all hangs together, and combined with that natty recording block in Audio Hijack it works really well for doing some private futzing). I also had the same issue as Scottlo did where Skype was only coming through on one channel (so when wearing headphones, only in one ear), so I copied his trick of adding in a block to duplicate the audio signal to the other channel to fill it out.

After that, I fed the composite music and mic signal into the recorder at the same time as Skype, and did a quick test of this setup with Tannis. It does hang together but my voice is obviously doubled up and it sounds a bit weird. A quick solution for this would be to use one account on my laptop to feed the composite signal into Skype, and then use a second Skype account on my phone to actually dial into the conversation. I’m guessing because I’m not using any kind of real mic on my laptop I wouldn’t get any problems with feedback with 2 Skype calls happening in the same room, but I haven’t tested this yet.

So, that’s where I’m at right now. I may try use this setup tomorrow, or I may play it safe for another week and do some more testing.

Once I get this working as I want, I think the next thing I want to fanny about with is bringing in some other sound samples and possible bumpers, and maybe playing about with the mic outputs. Brian Lamb had an interested setup with Audacity also linked in which looks like fun….

2 thoughts on “Some notes on a #ds106radio broadcasting setup”