History of the First Hospital and Chapel

This led in 1860 to the founding of the Royal Edinburgh Hospital for Sick Children (RHCS) at Meadowside house, 7 Lauriston Lane (today Lauriston Terrace)

In 1879 Royal Infirmary moved from Infirmary Street to a new Lauriston site near Meadowside House, location having been agreed in 1867.

In February 1885 the RHSC’s Ladies’ Committee approached the new Edinburgh Social Union (ESU) to request the decoration of a former coalhouse to serve as a chapel of rest: ‘the ladies do not wish anything extravagant or highly decorated but a suitable place where the bodies can be left reverently and lovingly for the parents before the burials’. The cost of converting the coal house (preparation of the walls) was estimated as £15.

In April 1885 Phoebe Anna Traquair (PAT) was the artist suggested by ESU. She was herself a young mother of three with her youngest a daughter of six years. She was to be given the cost of materials which was agreed that October. She painted the walls over the 1885-86 winter.

In 1890 a typhoid outbreak at Meadowside House meant the children had to be evacuated to Morningside Academy, renamed Plewlands House. Dr Joseph Bell was involved in regulating its facilities.

In 1891 today’s RHSC was planned. To be built at Sciennes, it was said to be ‘an entirely new building…with foundations so constructed as to obviate any possible risk of insanitary conditions’. George Washington Browne is the architect of the new hospital. In 1892 Meadowside House was sold to Infirmary who needed expansion and its demolition proposed. PAT encourages the signing of a petition to save her ‘walls’.

In 1894 ESU’s  offer to remove the painted walls at Meadowside House was accepted, and PAT’s art would be removed to the new building which opened in October 1895. The hospital initially had 118 beds.

The first mural scheme was re-sited in a single storey building designed by George Washington Browne in 1895, which was designed around the murals which were restored and extended by the artist herself who had campaigned for their transfer. The upper storey was added in 1931 to a design by Reginald Fairlie. 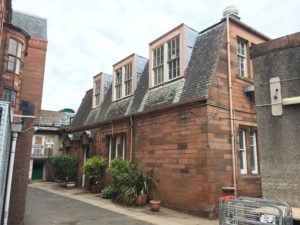 [These notes are based on extensively detailed ones supplied by PAT to the hospital and published by its governors in the 1900s.]

The transfer of PAT’s painted walls to Sciennes was not easy. 2 walls were found to have lath and plaster, so the laths sawn through, but 2 other walls had no laths, and there the plaster had been applied directly on to the bricks of the former coalhouse. Here, sections of the decoration had to be removed with the bricks still attached to the reverse! All panels were carefully placed in wooden boxes and transported by horse and cart round the Meadows to Sciennes. Some sections survived the journey but others did not.

Between 1896 and 1898 PAT restored the transferred decoration. As the new chapel was much larger than the first one – and as some parts did not survive the move – she also extended the decoration with a number of new panels. These are in a very different style, much simpler and deliberately intended to appeal to children. The primary red and blue and gold colours of the first chapel (inspired by medieval manuscripts) gave way to a much wider palette.

By the mid-1970s the hospital authorities had found that PAT’s overwhelmingly Christian iconography was no longer suitable for many families in a modern multi-faith society. They considered painting out the murals which some visitors found upsetting. Giles Robertson of the department of Fine Art at the university suggested the walls might be curtained to cover them as required. A first set of curtains was made. At the same time and also to modernise the room, a pine dado was applied to the lower walls. This covered the tiles and a section of the painted decoration below the window. The dado was removed in the 1990s.

There are several distinct themes which interweave through the decoration – motherhood, the journey of the spirit, the Crucifixion as the door to new life, and the reincarnation of the spirit.

The main focal point of the chapel decoration remains the same as in the earlier coalhouse-turned-chapel. It faces the visitor entering the chapel, and is a representation of Motherhood and shows the infant Christ with his Mother.  On either side an angel supports a grieving mother. Above, angels hold the books of death and new birth in their hands. To either side PAT painted four little scenes inspired by medieval manuscripts which illustrate creation, the tree of knowledge, the struggle of good and evil, and death and corruption.  This section is framed to the right with an illustration of a newborn soul receiving the robe of holiness and to the left an angel supporting a mortal ‘in the effort to hold to offer up its human heart’.

The Gothic lettering underneath reads ‘For he that shall save his life shall lose it and he that lose his life for My sake the same shall save it. Amen’.

This chapel had higher and longer walls than the earlier one. The angel receiving a child soul and pairs of cherubs and child souls in the upper sections are all part of the later, new decoration.

It is worth noticing the border where (to the left of the main panel) the tiny hands of God gently release a soul on birth and (to the right) similarly receive a soul on death. Taking her cue from the poetry of Dante Gabriel Rossetti, PAT represents the soul is in the form of a flame which travels anticlockwise in the lower border round the chapel, weaving in and out of the serpent of life – and doubling its identity as it gains in spiritual wisdom through life’s experiences.

The window originally brought daylight into the chapel but now supplies artificial light. The panel below represents the Cup of Life, and is one of the brick and plaster panels transferred intact. An angel holds the cup of humanity which bears the sign of the Crucifixion. To the left two human figures press forward together to drink from it ‘for men only attain to the divine self-sacrifice through fellowship’, and to the right two who have drunk from it fall dead but ‘it is only the flesh that is dead, their spirits have gained new life’.

This panel has sadly suffered from the careless application of a pine dado in the 1970s and removed about twenty years ago. These left a series of ‘bullet’ holes through the paint and plaster below.

Immediately on your right as you enter is one of the most beautiful sections of the original decoration. It shows three angels (or divine powers). Each angel holds a globe within which is a stage of a journey through life – this would become PAT’s principal theme in her art. The left angel has a globe containing a werath of grass, the second one showing a man fighting a dragon, and the upper angel’s globe three circles forming a cross ‘in which the blessed spirits shout for joy’. Behind them is the Bridge of Life guarded by them. These angels, like the one holding the Cup of Life below the window, are influenced by the beauty of PreRaphaelite women but PAT has also introduced a degree of mysticism and refers to William Blake’s poetry.

Running up the right side of this scene are lunettes containing portraits of great men: (from the bottom) Carlyle, Ruskin, Tennyson, Browning, Blake, Burne-Jones, Rossetti and William Bell Scott, Sir Noel Paton and Dr John Brown. PAT would include life-size portraits of some of these in her decoration of the Song School at St Mary’s Cathedral (1888-92).

A panel below the three angels is a scene from Ezekiel, chapter 9, where five angels were sent to destroy all in the city. Time is seen urging souls to judgment; the figure of Justice is seen beyond the doors of death.

The only transferred section here is the Crucifixion which is placed above a duplicate panel of the ‘close of toil’ where an embroiderer falls into the arms of an angel (divine strength and peaceful rest). This was adapted from a Rossetti painting of St Cecilia. The original section from the old chapel, with its brick backing, could not be embedded in the new building and was retained by PAT as a memento of her first commission. Part of the artist’s bequest to the Scottish National Gallery, this fragment will be displayed there when the Scottish collection reopens in 2020.

The late 1890s sections of the room are brightly painted, far more decorative and less didactic. They are contemporary with the rich and elaborate borders PAT was then painting at Mansfield Traquair Centre (MTC). Lush flowers and leaves fill some gaps in the decoration, or create a Tree of Life growing from the transferred Crucifixion on the east wall. Elsewhere, cherubs play with child souls (the upper sections of the principal, north wall).

The long east and west wall together tell the story of the Six Days of Creation in two ways, and again this parallels what PAT was painting at MTC (on the ceiling of the east bay of the south aisle).

Six red-winged angels, two to the west and four to the east, their feet hovering against the days of Creation running clockwise round the room from the north end of the east wall – the Universe or Planets; the Land; Birds and Fishes; Trees and Flowers; the Animal Kingdom; and Mankind (represented by an Annunciation, appropriate for a chapel dedicated to children). The feet of the first angel had been removed by the early 1970s to allow for a door linking the chapel with the mortuary preparation room.

Secondly, the Six Days are represented in horizontal bands behind these angels. On the east wall, Mankind is represented by Dr Ramsay Traquair and Hilda Traquair, the husband and daughter of PAT.

The ceiling of crossed circles in gold with black against the blue of heaven was painted by a commercial decorator to PAT’s design, as had been the central section of the chancel ceiling at MTC.

For more details of the iconography please refer to the account published by the hospital in the 1900s.