I’m on my way to London for my fourth #MozFest and as I’ve already written about, this year I’m running a session along with Alice White, the Wikimedian in Residence for the Wellcome Library. We’re doing a session in which we hope to make the case for why more people need to edit Wikipedia, and through some fun games introduce light touch ways in which folks can get started. Small edits can have big impact.

Whilst pulling together my materials last night I decided to use an image from our University Collections – a 17th Century map of Iceland that I uploaded during a Women in Medicine Editathon in February 2016. Sometimes when inspiration leaves me or my energy is flagging I focus on uploading into Wikimedia Commons many of the lovely openly licensed collections of images that are shared out on Flickr. There’s an excellent Flickr2Commons upload tool that makes the business of importing very simple.

This image was one of a number I uploaded on the day and because we have a very knowledgable Wikimedian in Residence he made sure all the images uploaded were tagged as coming from the University of Edinburgh. A colleague at Wikimedia UK spotted this new collection of tagged images and thought this map of Iceland in particular would be a suitable addition to some of the existing articles about Iceland. It was added to English Wikipedia, German Wikipedia and Simple Wikipedia.

Shortly after this the Euro 2016 football tournament kicked off, and a certain plucky northerly island nation started to do much better than expected (no, not Scotland – this isn’t a fantasy story I’m writing). Ewan our Wikimedian looked at the correlation between views and matches at the time.

Iceland’s Euro 2016 matches were on 14 June (1-1 with Portugal), 18 June (1-1 Hungary), 22 June (2-1 victory over Austria), 27 June (2-1 win over England), and 3 July (2-5 defeat to France). Around each of these events people all over the world were keen to learn about this surprising nation. Viewing numbers ( numbers of hits) show appreciable spikes for the matches against Portugal, England, and France.

On German Wikipedia spikes against each of the matches regularly exceeded 100,000 page views.

The biggest spike was for the victory over England!

It was also featured earlier this year in Creative Commons “State of the Commons 2016” report as one of the spotlight features for Wikipedia. 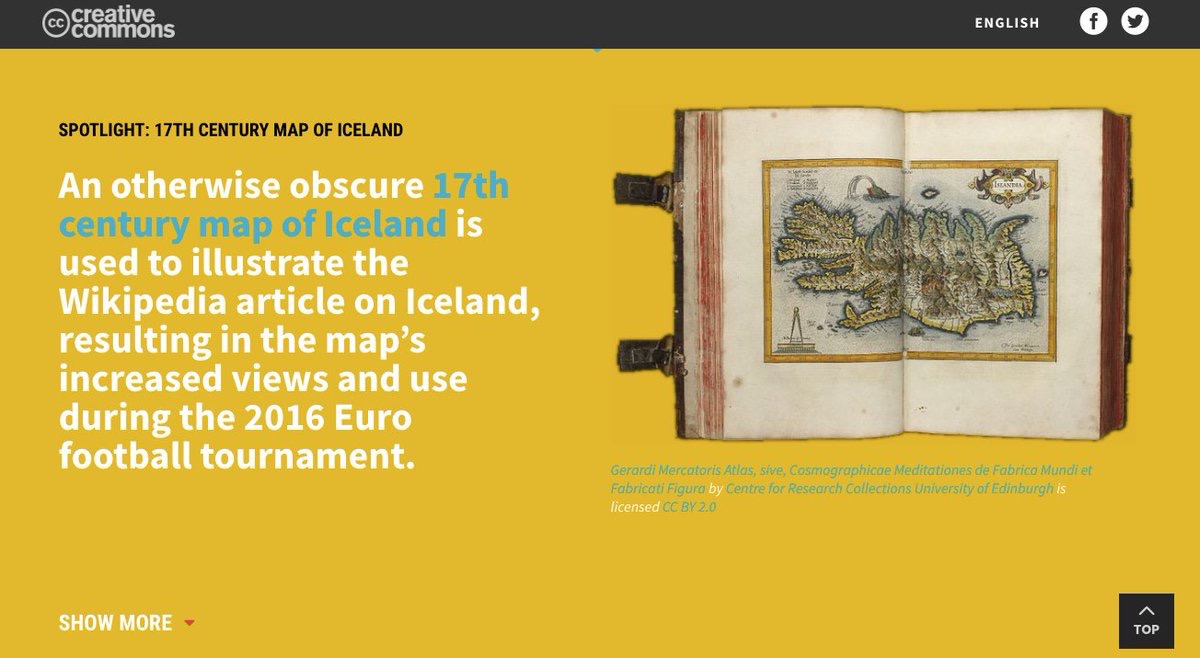 Small edits can have big impact.

(I said this was another story about maps – here is the first story about openly licensed maps and how great they are).

(By Centre for Research Collections University of Edinburgh [CC BY 2.0 (http://creativecommons.org/licenses/by/2.0)], via Wikimedia Commons))