So, this is a multi-part set of blog posts it would seem. I’ve decided to chronicle my ongoing mid-life crisis, and not content with cliches, I decided that this year would also be the year that I pushed on in terms of making a spectacle of myself. This is something I’m pretty good at, mostly unintentionally, but it needed to go up a level.

This post is to thank everyone who made that possible, and perhaps encourage anyone considering such a thing to give it a go.

I very much enjoy hanging out with Rachel Hosker, our amazing Deputy Head of Special Collections. I am convinced she is a walking catalogue, and I never have found metadata so alluring and fascinating as when we talk about the politics of cataloguing.

We talk a lot about data, and archives, and who chooses what goes into archives, how one deals with archives from unsavoury characters, or archives that have difficult histories (in a 400+ year old Uni you can bet there’s a little bit of that kicking around). We talk a lot about the digital world, and how we curate our identities, and whether we can still “burn” our archives by deliberately deleting our data, or maybe never even creating it in the first place. We talk about how our digital identities are being curated for us too – whether that be Trump’s tweets archived by the Library of Congress or the data doubles of ourselves that exist in places like Facebook.

For the last 4 years, Rachel has been one of a number of colleagues who have taken part in the Cabaret of Dangerous Ideas. CODI is a public engagement programme where we work with a professional production company, a professional comedian, and a local comedy club to put on a programme of shows as part of the Edinburgh Fringe Festival. The general idea is that one comes up with a provocative idea, which is then worked up a 20-30 minute piece to lay out a proposition for an audience. Thereafter the show becomes an open Q&A where said dangerous idea is debated and interrogated by and with the audience. You can get a sense of the kinds of things that go on from the 2019 programme.

I had an idea for a while that it was something I might like to try my hand at, but I never quite had the nerve to go for it. I also never quite felt like I had a good enough idea that would be engaging. Earlier this year I shared those thoughts with Rachel. She convinced me that we should do something together based on the chats we were having, and “Who Owns History” was officially born.

We started by plotting out the shape of our talk, detailing the various sections and topics that we wanted to cover. Rachel’s prior experience was vital in terms of understanding how much we had time to talk about and how to frame our provocative idea. I freely admit I would have been lost without her. We totally had too much material and could have filled an entire hour just rabbiting on. After getting a rough structure together, we then spent a few sessions just talking it through over and again, tightening up the content we wanted to cover, the flow, and the handoffs between us.

I was definitely playing second fiddle to Rachel’s expertise both in archives and in having done CODI before. By chance though I happened upon the prop that *I think* made the whole show in the end 😉  We had planned to use some childhood images of ourselves to illustrate ideas about history (weirdly the images we both choose involved pink clothing and animals beginning with “g” – truly children on the 1970s). However, I happened upon a fold up ruler in the Edinburgh Book Festival shop that promised “2000 year history by the meter“. It was the most random selection of historical events you’ve ever seen (nightgowns didn’t get invented until the 1600s and bizarrely Jesus’ 7th birthday was worthy of a specific mention). It worked brilliantly, and introduced an element of inadvertent physical comedy as we realised we’d never practiced unfolding it *and* holding microphones at the same time.

The night itself flew past in a flash. Our green room was a props cupboard, the stage lights were dazzling, a fan blew up my tunic for most of the show, and I only blanked it once. We did our blurb and then threw it open. We had about 45 in the audience, and alongside some friends and colleagues there were actual members of the public, who paid real money to be there. We had about 30 minutes of lively and at times impassioned debate, and the questions were still coming as the show closed.

For anyone considering doing something like this, go for it. It was terrifying and I don’t regret it for a moment.

There are so many people I want to thank for making this possible. Rachel, natch. The inimitable Susan Morrison – comedian extraordinaire and compere for the evening. I can’t describe how comforting it is knowing that Susan is up there with you at these events. The support she gives to all the performers is just brilliant. Fair Pley productions who actually make this all happen, and the great team here at the Beltane engagement network, including Isobel, the fantastic 2019 summer intern.

We had a lovely celebration event a couple of weeks ago to thank all the performers and it was great to meet some of the others who had done shows. Isobel had created awards for all of us, and I was delighted to receive ours on behalf of Rachel and myself (we think the favourite CODI fact must be ruler-related). Susan also reminded us all that each of us did a show at the biggest arts festival in the world. People we didn’t know bought tickets, they even turned up. And nobody asked for their money back.

I’d do it again in a heart-beat if I had the chance. 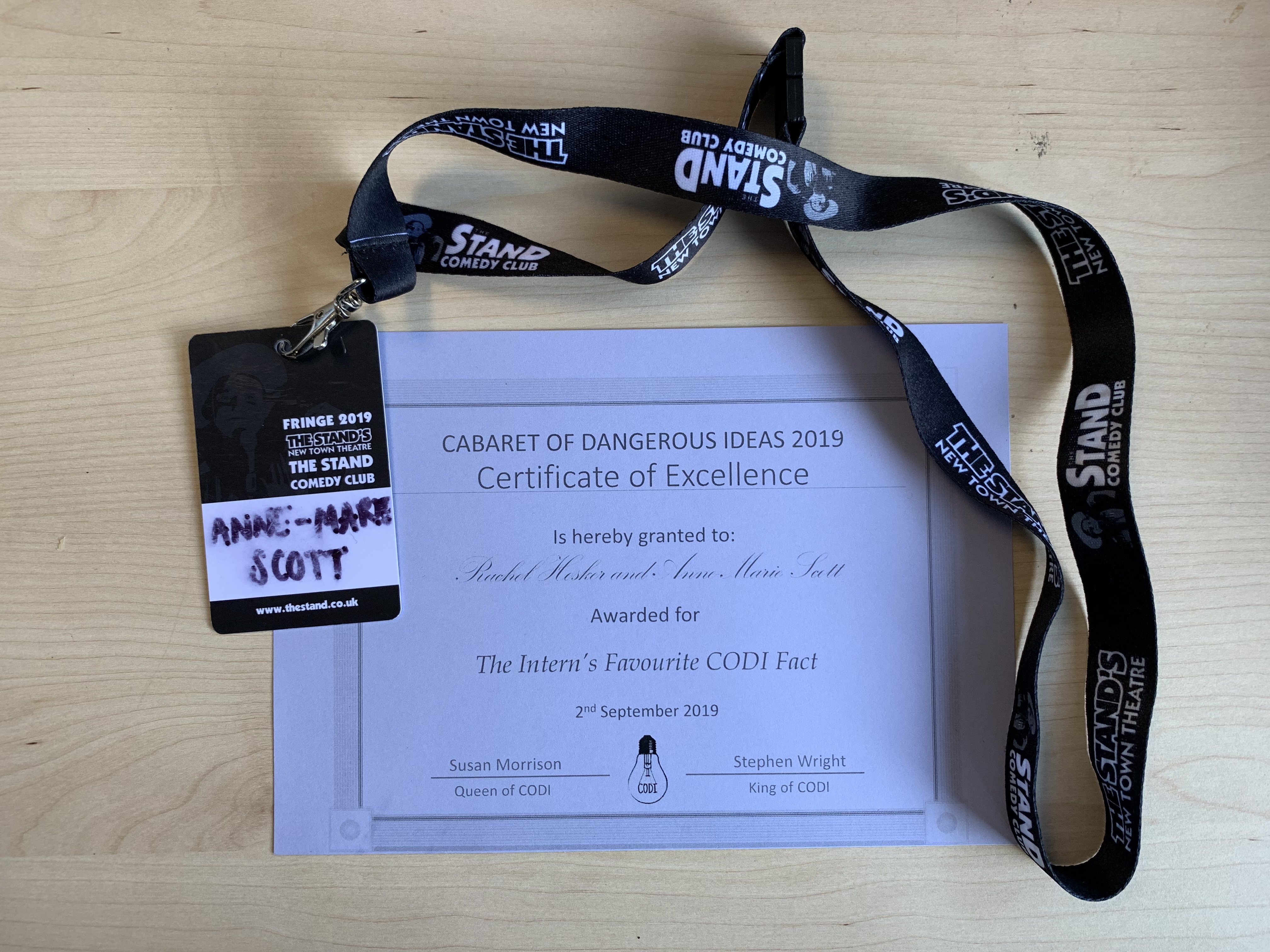