I’ve been further tinkering with and trying to improve on my #ds106radio broadcasting set-up and have had a little bit of a breakthrough which has finally led to me getting a new setup in place that I’m pretty chuffed with. As much as anything I’ve enjoyed the learning and experimentation that’s come with it.

My first broadcasting set up in Audio Hijack was a pretty simple affair, and in the last post I wrote about it I described an idea I had for feeding the music being played back into Skype using Loopback so that Tannis and Maren could hear it whilst it was being broadcast. I was swithering on whether to buy a license for Loopback but in the tests I did I was struggling with some crappy audio on my own mic stream so I held off. I didn’t go back to it again seriously for quite some time, but a few weeks before we took our break, we had a little on-air futz at the start of a broadcast which turned out to be a lightbulb moment. For a bit at the start of the show nobody could hear my mic at all on the broadcast. I had been playing around with the set up and left a Channels block set to Duplicate Right enabled on the Skype feed in. People had commented previously about the Skype audio on our broadcast, with my voice in one ear and Tannis and Maren in another. Using that block I’d stripped my own mic out of the Skype feed into the broadcast.

The trick to piping the music into Skype for others to hear whilst broadcasting involves (1) creating a composite feed of whatever is playing the music plus my mic (2) feeding that in as the mic input to Skype. The crappy audio issue I mentioned above when playing with Loopback was because my own mic was doubled up; it was coming out of the Skype feed with everyone else, and *also* coming in as it’s own direct feed. I have to pipe my mic into the composite stream going into Skype for everyone on the call to hear me, but the quality of the feed coming out of Skype really wasn’t great enough that I was happy to have that instead of a direct mic feed. So that little futzing moment was a breakthrough as I knew exactly how to strip my own voice out of the Skype feed.

I was still undecided about buying a license for Loopback – it is pretty pricey. I had a few issues with Soundflower on my Mac so I thought I’d check out BlackHole instead. I made a composite feed in Audio Hijack, piped into BlackHole via an Output Device block.

I then piped Blackhole into Skype as the Mic input.

That’s the setup that I used last Saturday and Sunday to broadcast with Sarah and Johanna, and on Sunday with Maren and Tannis. What I really enjoyed was that because others could hear the music I wasn’t having to cue people back in when the song finished and it changed the dynamic of the chatter in a way I liked. I’ve never fully enjoyed the dynamic of being the only one who can hear the music as I feel I end up directing things a bit, as opposed to it being a more natural three-way conversation.

What was a bit of a pain in that configuration was having to turn up or down 2 volume sliders when music was playing (my mic and the Skype input). What I wanted was a way to have my mic and Skype attached to a single slider. Also, when the music is playing we switch to a Twitter DM back channel to chat and queue up the next track etc. The absolute ideal would be to be able to chat to each other in Skype still, but strip it from the broadcast.

I thunked hard about that for a bit until I had another wee lightbulb moment. I created a new Audio Hijack session and created the composite stream standalone in there. 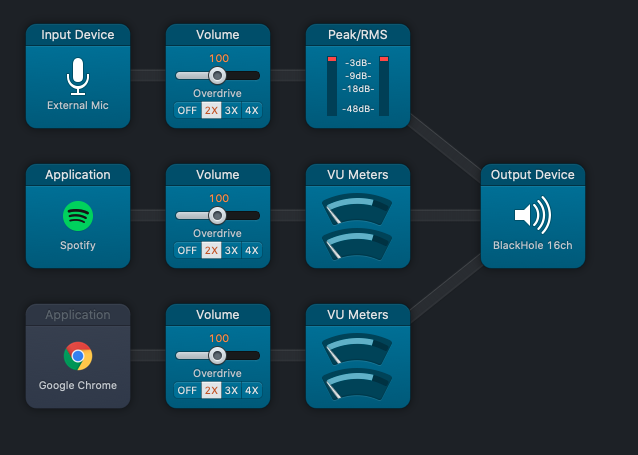 I then configured out my main broadcasting session with music inputs coming into one Volume block and all voice inputs into another. I also removed the Output Device that was after the Recorder in the setup above, and instead put seperate blocks in for each of the feeds below. 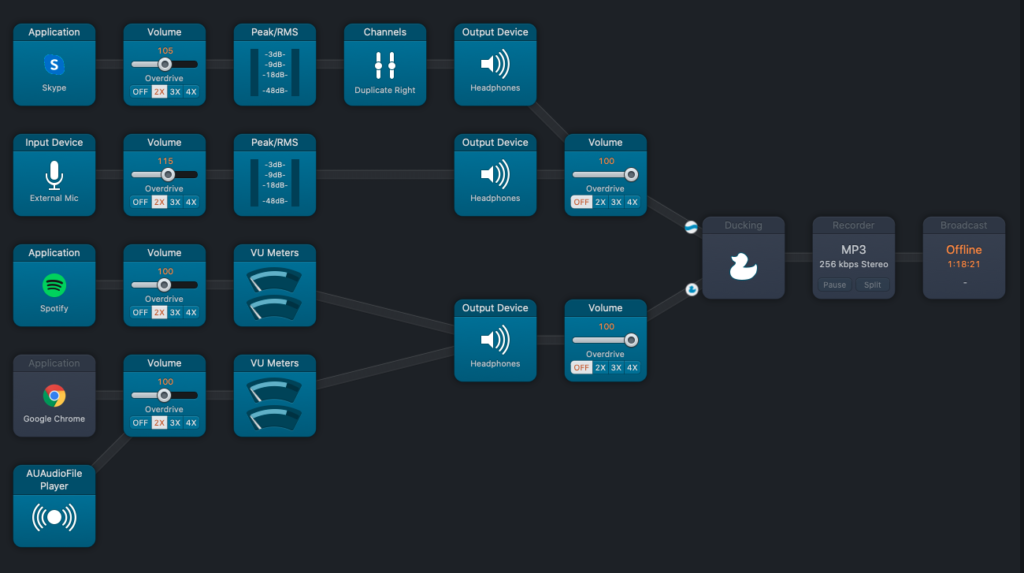 A quick test with Tannis this evening confirms that with this set up I can pipe the music into Skype for her to hear, and when I slide that top Volume control down to 0 it cuts the feed from the broadcast but we can still chat to each other. It’s a very egalitarian set up as it stands now – either we can all speak on the broadcast or none of us can, and there might be merit in the future in splitting the mic and Skype out into 2 seperate Volume slides again for other kinds of broadcasting, but right now I really like this.

There’s a little more playing around I want to do with things – the Ducking block looks fun and useful. At the moment however, it ducks the audio in to the broadcast in response to Skype or my mic, but the feed that Tannis and Maren are hearing in Skype is still at full volume, so it’s not a super good experience for them. More to do there.

Also the AUAudioFilePlayer is a very neat little block for queing up some sound samples in Audio Hijack – like a station bumper or a cute little loop for example – which could be fun and again keeps the whole setup really simple for me by not having to bounce out to another application to play that kind of thing.

So, some more fiddling to do, but some real progress. Most of all, I’m kind of just loving the learning and the poking and the playing. This stuff is addictive. I could get hooked #4life.

I did a quick test with Tannis yesterday which verified that it all worked technically – yay! Scottlo and I then jumped onto the radio later in the evening for a bit of live testing and this was really worth doing as it threw up a really obvious (in retrospect) problem – the feed of music into Skype was too loud to talk over whilst it is playing out. I popped an Output block into the Audio Hijack session creating the composite audio feed to Blackhole and turned off the Output block that let me listen to the music going into the live feed. We then fiddled around a bit with the volume going into Skype. The Volume block slider seems to not to give very fine grained control so it was a bit difficult to get a nice volume level. I think we got there in the end, but it’s something that’s going to have to be set or at least checked at the start of the next broadcasting session before going on air. I also will rely on listening to this softened feed of music via Skype versus the broadcast level stream too. 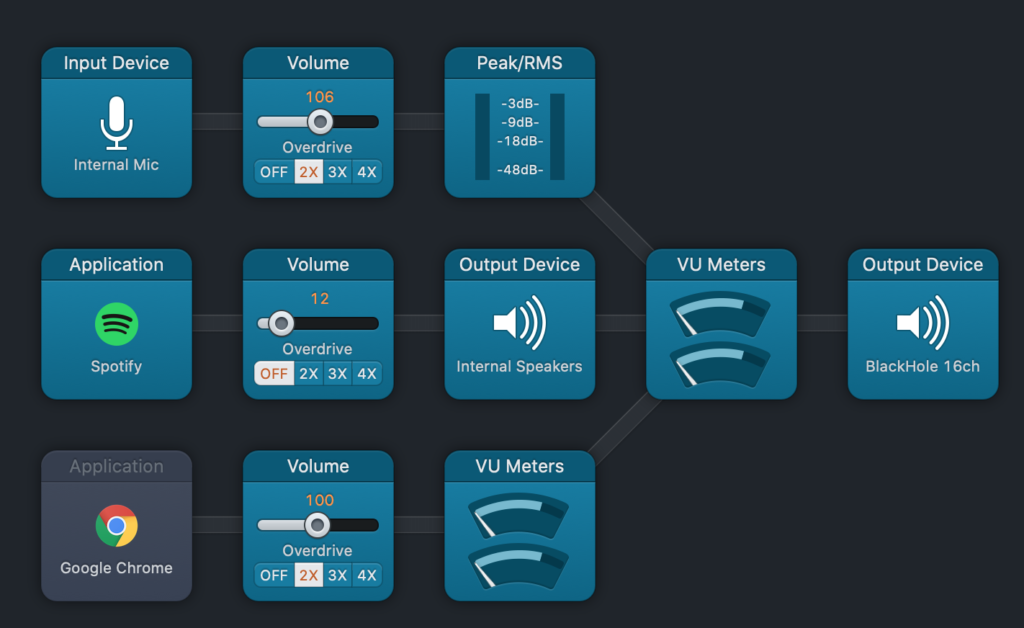